Interview with The Hidden Grove Series YA author Michaela Daphne 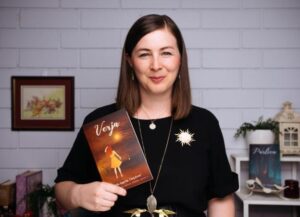 Michaela Daphne is an Australian Young Adult author of the Hidden Grove series, publishing Purlieu in 2018 and Verja in 2020. She’s spent over ten years volunteering and working with high-schoolers and young adults in Australia and Singapore, and her passion lies specifically with helping to equip young women for healthy relationships. The Hidden Grove series is inspired by personal experiences of her own life and the lived stories of the young women she’s encountered.

Michaela lives in Brisbane, Australia with her husband.

Read on for the short version of the interview or watch the whole interview here.

Welcome Michaela, I’d love to know what inspired you to start writing.

When I was in primary school, I fell in love with reading and devoured all the good stuff in my school library – Roald Dahl, Judy Blume, John Marsden. But it got to the point where I didn’t know what to read anymore and found myself not enjoying what was left available to me. One Friday during a period when my best friend and I had a falling out and I didn’t have anyone to hang out with, we were given free time in class so I decided to write a story. I figured that if I couldn’t find something good to read, surely I could write something good instead. It was there, as I wrote, that I realised I wanted to be an author and write stories that I would want to read.

What is the significance of the titles in the Hidden Grove series?

Each book of the Hidden Grove series is named after the fantasy world that the book takes place in. The names of these worlds also have a meaning that is relevant to the premise of each book.

Purlieu means on the edge of a forest, which is the landscape where the main story takes place, but it also means to look in on something, like a fly on the wall to your own life. Its significance to the first book in the Hidden Grove series is that the main premise of the story revolves around Evelyn realising she’s in an abusive relationship and needs to get out. When someone is in a situation like this, it often requires taking a step back to see that the way they are being treated isn’t right, because they’re often too close to the situation and are blinded by the love of their partner.

For Verja, it means to guard, defend or protect. This world is as its namesake in that the underground citadel is heavily guarded and defended from any person entering or exiting the world. It is also a reflection of the state that Evelyn is in when she finds herself in this world. She is heavily guarded against men in fear of being treated the same way as her former boyfriend treated her. This is the experience of many who have been in an abusive relationship – they close themselves off from the world and it requires a lot of hard work to find healing from the experience before they are ready to open up again fully.

I’m not sure if you’ve heard of Henryk Jurkowski who was a Polish historian and scholar of puppets and puppet theatre, but he speaks about elements of the ‘marvellous and the magical’ within storytelling.

You seem to use similar elements of this ‘marvellous and magical’ within your writing. Through the characters Evelyn and Tiffany, (from the first book, Purlieu) for example, you connect us with very relatable, every-day teenage experiences. Yet, like puppetry in a way, you make use of visual tricks and fantasy while at the same time reference specific childhood/teenage hopes and desires. In doing so, you’re able to depict forms of escapism and the borderline between reality and dreams.

How does this method help you deal with difficult topics within literature for young adults (aged approx.14 to 18 years old)?

I haven’t heard of Henryk Jurkowski before, however you’ve hit the nail on the head with regards to the tactics I use throughout the Hidden Grove series. Because of the sensitive nature of the story – following an abusive relationship and the subsequent journey of healing – I intentionally placed the story in the context of a fantasy world in order to help readers explore the topic in a detached manner. I wrote this series specifically with those in abusive relationships in mind, knowing personally that when you’re in a situation like that, no one can tell you to get out. You have to make that choice yourself. By imparting these truths to them in the safety of a story set in a fantasy world, I believe they would be more open to seeing the reality of their situation.

What is the key message in the first of the Hidden Grove series, Purlieu, and what do you hope readers take away with them?

My primary reader is young adult women, and ultimately what I’m trying to impart to them is that they do deserve real love. I want them to walk away from reading Purlieu knowing the warning signs of an abusive partner so that they can either avoid people like that or make the decision to leave their abusive partner – because they believe they deserve to be treated better than that.

How do you deal with the emotional impact of a book (on yourself) as you are writing the story?

As an eighteen-year-old I had an abusive boyfriend. Leaving him was what inspired the Hidden Grove series because I didn’t want any girl to ever have to go through what I had been through. The act of writing Purlieu and Verja has been a healing experience for me personally, as I’ve had to re-live that experience in my mind as I dissected it, tried to understand it, and claimed any good that came from it. The very act of writing about it and therefore telling my story has helped me to deal with the emotions of what I went through (and subsequently what I was putting Evelyn through).

The mood of some of the scenes in Purlieu, especially the beautiful but equally disturbing dancing ice sculptures reminded me of Susanna Clarke’s Jonathan Strange and Mr Norrell, and her latest book Piranesi. I also thought of books like Narnia and Alice in Wonderland.

Who are your favourite authors and influencers in your genre?

I just finished reading Piranesi. To be honest, I still don’t know what to make of it!

I’m an absolute Harry Potter nerd. My sister and I hang out once a fortnight to watch our way again and again through the films. It would be a lie to say that it hasn’t influenced my writing.

And as I mentioned before, Narnia is visually a definite influence on Purlieu, but for the Hidden Grove itself, I drew upon Never Never Land in Peter Pan. My favourite authors in my genre (and I would self classify as YA fantasy) though would have to be Lynette Noni, Suzanne Collins, and Andrzej Sapkowski.

What was the journey of publishing your first book like?

Massive. Just massive. It took me over 13 years to go from the spark of an idea to publication. The story morphed and changed several times along the way before I really settled on what it was really about. An abundance of thanks to my friends and husband for baring with my drafts!

I lived in Singapore for a few years with my husband, but I couldn’t find work. It afforded me the opportunity to really dig into writing instead of finding time outside of my day job. We were at a friend’s wedding in Singapore when I heard about a crowd funding platform for books called Publishizer. I decided that if I ever wanted to publish, I needed a good editor and using Publishizer to crowd fund the first round of sales gave me the collateral I needed to do that. It all snow balled from there as I rather unintentionally became an indie published author – traditional publishing had always been the direction I thought I was heading in.

The day of my first book launch with Purlieu was one of my favourite days of my life. It was a proof of concept that I could do this. That I no longer wanted to be an author – I was an author.

What advice would you give a new writer, someone just starting out?

My high school English teacher said that if I wanted to be a writer, I needed to read more. While I believe this is true, I would amend it to say you need to read with intention. Research how to structure a story – beyond just beginning, middle, and end – and when you read, pay attention to how the author crafts their story around that structure. This will be one of the best teachers to help make you a better writer. Don’t expect to just be brilliant without putting hard work in.

What do you like to do when you are not writing?

I’m an absolute homebody and the living room is my most favourite room of the house. When I’m not on the couch writing, I’m on the couch reading or watching Netflix. Occasionally I’ll move to the studio to dabble in some millinery, but only if I’ve got a lot of time on my hands.

As a Brisbane based author, where’s your favourite spot to visit in Brisbane? What makes it so special to you?

I’m pretty partial to South Bank. It’s where I was first inspired to write Purlieu. It’s where my husband asked me out. I’ve got many fond memories of walking beneath the Arbour late at night. Outside of the city though, I love to go on day trips into the Gold Coast hinterland. A lot of my childhood was spent at Mt Tambourine picnicking and going on bush walks. These days I try to go up at least once a year during the misty winter-time. There’s just something about low fog and greenery and a nip in the air that delights my heart and makes me want to get creative and write.

Most importantly, tea or coffee?

I live by tea. My days are basically broken up by mugs of the stuff. I get it from my parents.