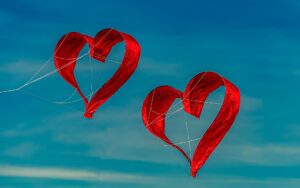 Writing activations have a way of releasing your writing like a gust that blows a snagged kite out of a tangle of branches.

For the Write Links meeting in June, we had the pleasure of taking part in a series of creative writing activations led by Yvonne Mes — Write Links coordinator and children’s author and illustrator — which were inspired by activations from Reedsy.com.

We were given up to five minutes to work on each prompt. Setting a timer is great as it allows ideas to take flight before the critical mind has time to take over.

So, if you’re writing has hit a snag, try some or all of these prompts and release your creative kite up, up and away!

Here are some of the stories that soared from members’ pen tips that day.

I sit under the oak tree, waiting for Belle. She must be sick today.

Three boys stride across the playground.

Ugh. Preps. I can smell them from here.

Do I want to play ‘cops and robbers’. Um, hello?

Do I want to play space monsters?

Will I pretend to be pirate for a packet of Twisties?

Fine. Whatever. Walk the plank.

As Chloe lay in bed that night, she thought back at how she saw the cat on the school roof that day, with her kittens and how the poor cat was all alone in the world. Yet she stayed there with her newborns. While Chloe’s own mother was gone.

Song – “Alone in the world”

Starts about a cat on the roof,

making sure she stays by her kittens.

Chloes’s own mum is gone – leaving her alone in the world.

Dad is there, but it is not the same.

Chloe doesn’t want the cat to be alone.

The rescue will take her if they can get more foster carers.

She decides to become one.

Ella was so happy she had her lucky leaf. But then, in an instant it was gone, and she was heartbroken.

It’s floating down the creek.

Lonely and so sad, I run down the riverbank…

and bump into Frank.

Questions between Alexio and Q (an inquisitive questioner).

A: My best friend was kidnapped.

Q: Why did he get kidnapped?

A: He picked up something he shouldn’t have.

A: He didn’t know what it was.

Q: Why didn’t he know what it was?

Q: Why does that mean he got kidnapped?

A: Only monsters know the true purpose of the device.

Q: Why doesn’t everyone know?

A: The device is a secret from humans.

A: Humans are weak.