The Inner World of Characters, with Karen Foxlee by Zewlan Moor 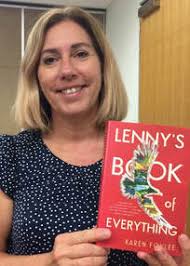 Karen Foxlee was a humble presenter at the WriteLinks Middle Grade Workshop on 2 March 2019. This was despite just receiving notification that her latest book, Lenny’s Book of Everything, had been nominated as a Notable Book in the 2019 Children’s Book Council Awards for Younger Readers (update: now Shortlisted).

She started the sess

Foxlee’s way of writing is very character-driven. She said, “The whole aim of my existence is to make characters that readers care about.” Her tips for creating memorable characters are to try to open yourself up to who is telling the story, and to give yourself time.

This time is essential because while some characters, such as Lenny, arrive fully-formed, “others look like the real deal, but you smell a rat.” This happened with the character of Kitty in A Most Magical Girl, where it took a lot of peeling back the layers to find the real Kitty. 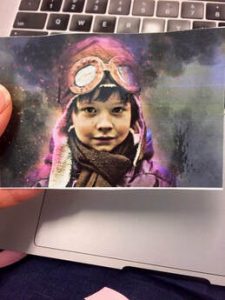 Foxlee finds inspiration for her characters in memories of people she has seen on the street, characters in books and films and family stories. However, she really emphasised looking within your own heart. Many of her characters directly reflect periods of her life and aspects of her personality. Jenny Day is Foxlee as a child; Ophelia is her nursing self, wanting to be organised and sensible; and Rose is her teenage self.

In terms of differentiating characters, Foxlee likes to think in terms of the Big Four Chambers of the Human Heart (but they are not the anatomical metaphors you might think):
1. Memories eg Lenn

Once you have more understanding of your characters’ motivations, the next challenge is conveying this to the reader. This is where literature is different from other art forms, because readers have access to the thoughts and internal dialogue of characters.y’s memories of her father’s nicotine-stained fingers
2. Fears eg Lenny fears the outcome if her brother doesn’t stop growing
3. Secrets eg Lenny’s secret shame of her brother
4. Important Things (objects; intangibles; talismans) eg Lenny’s sticker from Wyoming
She feels that identifying one of these for each character is more powerful than describing the character.

And this, according to Foxlee, is where things can go wrong in the writing. If you find yourself stuck or slipping out of character, she suggests getting messy with stream of consciousness writing. Also, staying switched on to thought triggers, for example the hole in Ophelia’s pocket reminds her of her mother. Foxlee recommends being consistent and staying centred in the heart of the character, describing how they feel and think, not just describing things. And utilising the five senses while doing all of this.

As usual in an audience of writers, we asked all the process questions of Foxlee. She answered very graciously, basically saying that she is a pantser, starting with characters and then finding the plot. If she gets stuck she often uses the “cracked mirror” approach, where she writes things that might happen in the story, for example Lenny and her brother might want to run away; something about a doctor’s visit, and then puts the pieces together. By three months in to the writing process she knows how these will all fit together.

In terms of her writing life, Foxlee is still juggling her writing with casual nursing and motherhood. She gets up between 4:30 and 5am and writes until 7am; then again 9-11am on her writing days.
Ideally she likes to write daily for three to four months. She was very grateful to be awarded a Fellowship grant from the State Library of Queensland to facilitate her writing.

Karen Foxlee’s latest book is Lenny’s Book of Everything. Her first picture book is being released in May 2019. 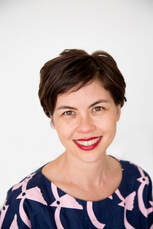